Imperial stay grip. Gold inlay. Originally sold by Thomas Wittmann. Has a beautiful imperial cipher on the grip and the date 1626 when the Regiment was originally formed. The piece was presented to Lt. Schumann. The gold on the blade would rate about 90%. It is triple engraved and is dated 1914 to 1918, basically the duration of WWI. It should be noted that Schumann survives the war and later became a Divisional Commander under Field Marshal Rommel. As only Wittmann can write, there is an extremely long description which will accompany this piece which was sold by Tom 20 years ago. 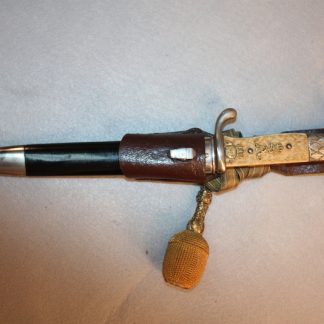