This sword was presented to a Captain Klormann by the sword maker Eickhorn where he worked. Presented to him in 1943, it has light blueing remaining on the front panel etch and it has an actual Knights Cross engraving on the reverse. The blade is in excellent condition overall and has the late over the shoulder squirrel. It also has the initials ”HK” engraving with extra engraivng to the hilt to make it really standout. Researcher Robert Mcdivitt found 30 pages of info on this recipient. This will be included with the purchase. He won the Knights Cross in 1943 and served in Poland, Russia and Africa. He unfortunately was killed in Warsaw Poland in 1944. The sword loosley translates too ”in true commradeship and anniversary presented by his fellow workers from the Eichkorn factory”. 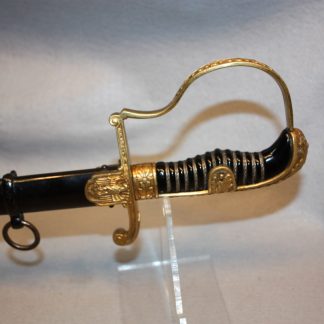