The front of the banner has one of the most detailed naval eagles I’ve ever seen. Has all the contrast stitching to define all the wing and body areas. The entire perimeter is bordered in gold crests. Has a nice gold fringe on three sides. The rear is the standard naval flag. Taffeta rayon type material with nice insignia of the battle flag. Missing the suspension tabs. The vet originally tacked this on the wall and also had two of these, but sold one prior to my acquiring this one. 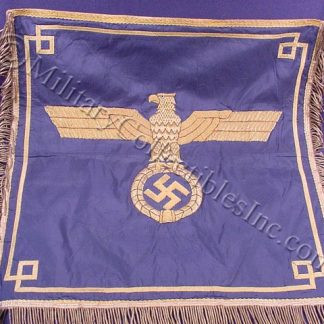