This sword originally belonged to an officer of the 8th Westphalian Hussar Regiment. It was a Capt. Graf Von Wedel. He was a Captain during the Franco Prussian War and then became a General. He is listed as a General in 1895. Not common to find Franco Prussian period swords. Overall condition of the sword shows its age, but has no sharpeneing to the blade. Damascus would clean up nicely and is a band style damascus. There is still fair amount of gold left on the engraving though most of the gold is off the inscription. The lion head is missing one ruby eye but it is deeply chiseled. Langet with crossed swords is common with Hussar period pieces. The eagles on the blade are alomst like the US eagles on Civil War swords. Quite possibly copied since the Germans made most of the US swords. The only unfortunate part is the over time the scabbard has gone missing. 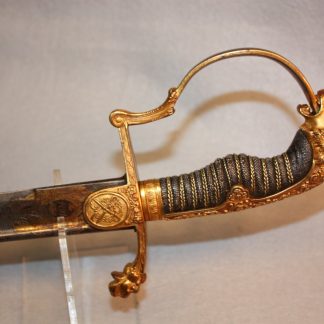